We've been wanting to take a trip out to Oregon because my brother and his family live there. My brother works at a golf resort that Chris has really wanted to play at and they just had a baby and we wanted to see them, it had been so long. We finally did it and we had so much fun. Our first stop was in Portland. We had heard about a little donut shop called Voodoo donut so we decided to try it and it was definitely an experience.

The shop is this crazy hole in the wall but the donuts are to DIE for! My favorites were the oreo peanut butter and maple bar with bacon on top. YUM. It was so good we made a stop on our way back home! We spent a little time in Powell's bookstore which was awesome. It's supposed to be about a city block wide. It was pretty cool and we got a bunch of books for Claire for $1. We did a little shopping downtown and then headed to the Portland Children's Museum. It was really cute! They had so many interactive things for the kids to do. It happened to be the grand opening of their Clifford exhibit so they had a ton of stuff going on. Claire got to meet Clifford and play in his giant dog bowl.

They had the cutest pretend grocery store and doctors office. They had an art room where Claire made a pumpkin out of clay. It was just a fun place and I'm glad we went. Claire was pretty upset when it was time to leave and I don't blame her. After the museum we headed over to the portland temple.

It's a unique temple because it has all of the steeples. And it was the perfect time of year because the trees around the Temple were gorgeous. It was funny because we were heading out of Portland and didn't know where the temple was. We stopped for lunch and just happened to be sitting by two ladies that were talking about relief society. So they were able to give us directions! While we were staying in Bandon we visited sunset beach and headed down a little further to a spot where the sea lions like to hang, there were a million of them!

We went to old town Bandon and walked the pier and had fish and chips- yummy.

Claire and I went to the Coquille Light house and climbed to the top. There were some gorgeous views and I was pretty proud of Claire for climbing to the top because it was kind of scary!

On Sunday we took a day trip along the coast to California and visited the Redwood national forest.

I was so excited to see a Redwood, they are so amazing. I don't know how people can look at them and not believe in a Heavenly Creator!

We took a little hike called Fern Wall- I think, it was really wet, but fun and the sunset was AMAZING!

Ben also took me on a little tour of the Bandon Dunes resort where he works.

They have a new course opening soon, it was really beautiful and Chris had a BLAST golfing a bunch of the courses there. We got to meet our newest nephew Matthew who is just sweet.

We had so much fun but we were so sad we had to leave, next time we definitely will be taking more time to spend there.
Posted by Snedakers at 11:42 AM 3 comments:

Just wanted to post a little about my favorite people. It seems like they are growing way too fast. 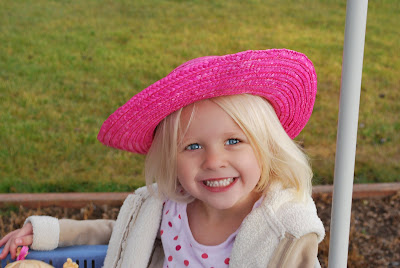 Claire is a girl and she's three. What else do I really need to say? She is so dramatic!! Last weekend we had a fun afternoon out. We went and got her haircut and then went to find her a halloween costume. She decided she wanted to be Snow White and luckily we found one on sale at K-mart. Then we headed to my favorite little shop in Rexburg. They have the yummiest cupcakes I have ever had. I have to record this little conversation because it was just cute, and you will probably not get this unless you've seen Cat in the Hat 100 times like I have. But we were sitting there in the cupcake shop, eating our cupcakes just enjoying the moment and Claire says with a little smile "Mom, you can make a cupcake out of just about anything." "Anything?" I say. "Anything" she smirked back. I laughed.

When we were selling our house I promised Claire that when we moved she could have a goldfish. I am regretting this because I really DON'T like fish, but I'm just glad I didn't agree to a puppy or something. So welcome "Goldie" to the family. Quite original name I thought. Of course I'm stuck taking care of the thing. 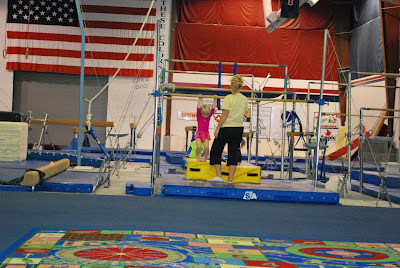 Claire also started Gymnastics in September (gynamstics is what she now calls it) she is making progress and just enjoys it so much. It's the highlight of the week for her and I just wish they had an earlier class because she is asking me all morning if it's time to go yet. I didn't want to do preschool yet so this has worked out well for her to get some social time. 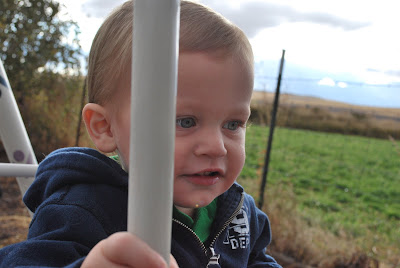 Jake is busy and so much fun. He is so happy! He plays for hours on end in his room with his toys. He loves playing pretend with his animals. He loves playing with Claire and I think they are pretty close buddies. Unfortunately that means he's also always got a doll in his hands or Claire's dress-up shoes on. He also loves to sing in the car and he's saying around 15-20 words. My favorite is balloon - he says "boon". He love to eat apples and when we taught him the word apple he started throwing his apple because it sounds like "ball". He is still an early riser, hasn't slept in a day in his life. I'm just glad he's not still getting up at 5am anymore. He's still a super-pooper. I'm usually changing him about 3-6 times a day! I'm definitely spending way more on diapers than I did with Claire. He is 16 months and this is definitely one of my favorite ages. They are still babyish but more independent and learning so much everyday. He has started going into the nursery at church and does pretty good. He gives high fives and kisses and is just such a sweet little guy.
Posted by Snedakers at 7:15 AM 3 comments: 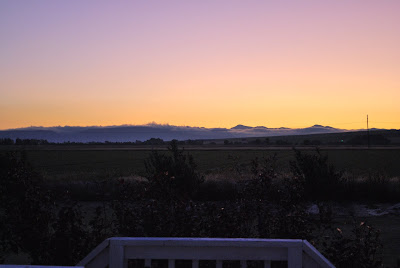 It seems like everyone has posted about how much they love fall. I admit, I love it too, but this year has just been weird. It was super warm until about 2 weeks ago and now it's SUPER cold and the leaves are finally falling- but their green! I've never seen a fall like it. The sidewalks are filled with green leaves. It's so strange! We are gearing up nonetheless, Chris bought 3 very huge pumpkins that are sitting outside our front door, and Claire and I picked out her Halloween costume on Saturday. She's going to be Snow White. The colder weather means that I actually wake up before the sunrise which has been nice because I have the most BEAUTIFUL view of the sunrise above the foothills/mountains from my backyard. We are home tending right now and loving the extra space, beautiful home and views, and the extra land, we are out in the country a bit in Milo on about an acre of land. It's been a perfect fit for us until we find our next home. We feel so blessed. 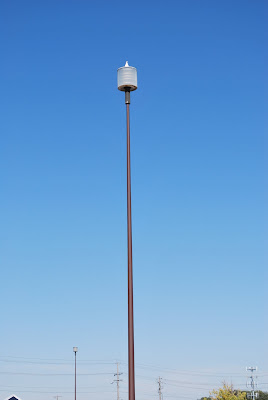 This picture I just had to add, I saw this bird that had made a nest on the top of this light pole and thought it was funny.
Posted by Snedakers at 11:32 AM No comments:

A few weeks ago I took a quick trip to Utah to see my sister perform. My mom came out from Virginia and my sister and her kids came from Wyoming, we had a great time, shopping and eating. We've been bugging my sister about doing a performance of all the songs she's written and she finally gave in. She is my favorite song-writer/singer and she gives me chills when I hear her stuff. I just wanted to post a bit of her concert, it was so much fun and I want to go to another one soon! This song she wrote is called "Make up your mind" and it was my favorite of the night. I just wish the video was better on it so you could hear the words better. This video just doesn't do her justice! She has some great lyrics. Alright enough bragging. Enjoy!
Posted by Snedakers at 9:13 AM 1 comment: 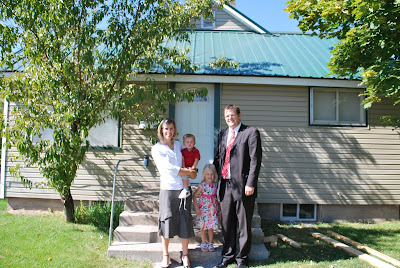 So we sold our first little house and finally moved, which is the reason I haven't posted in a while. Although I am so glad to finally be moving on, I've definitely had a few crying sessions over the home where our kids learned to walk, where we brought Jake home from the hospital, where Claire swung on our swing we put on our old apple tree everyday she could. Where we played in the leaves from our huge Maple tree out front. Memories I will treasure forever. It just makes me a little sad to know that this part of our lives is over.
Posted by Snedakers at 7:30 AM 1 comment:
Newer Posts Older Posts Home
Subscribe to: Posts (Atom)