I didn't want to forget this weird/funny thing Claire is doing so I thought I'd post. When we were in Virginia visiting my family, Claire and my mom were doing a puzzle. My mom would put the piece part of the way in and Claire would push it the rest of the way in with her elbow. Then she'd say "nog-it". I don't know where she got this from or if she made it up, but it's pretty random, and kinda funny. Now she does it to Jake when he's bugging her. She'll get her elbow right up to his head and "nog"-him pretty hard. I think this verb needs to go in the dictionary, cause it's in regular use at our house.
Posted by Snedakers at 9:53 AM 1 comment:

If something has an X then I have done it otherwise it has an O. Enjoy and see what you have done too :)

"X" marks the things I have done during my lifetime:
(X) Been to Canada
(X) Been to Mexico
(X) Been to Florida
(X) Been to Hawaii
(X) Gone on a blind date
(X) Skipped school
(O) Watched someone die
(X) Been on a plane
(O) Been on a helicopter
(X) Been lost
(O) Been an extra in a film DOES A PRETZLEMAKER COMMERCIAL COUNT?
(O) Been to a TV show taping DOES THE TODAY SHOW COUNT?
(X) Visited Washington, DC
(O) Traveled by San Francisco trolley
(X) Traveled to Europe
(O) Traveled to Asia
(O) Went to the top of the World Trade Center NO, BUT I HAD MY PICTURE TAKEN IN FRONT OF THEM
(X) Been to Notre Dame (Cathedral)
(O) Been to Jamaica
(X) Swam in the ocean
(X) Cried yourself to sleep
(X) Played cops and robbers
(X) Recently colored with crayons
(X) Skipped a final exam - FRENCH - OUI OUI, MOM WAS SOOOOO MAD!
(X) Sang Karaoke
(X) Watched the birth of a child I GUESS I'M JUST COUNTING MY CHILDREN
(X) Paid for a meal with coins only
(X) Been to the top of the St. Louis Arch CREEPY- DON'T GO UP WITH A LARGER PERSON, THE LITTLE BOOTHS ROCK BACK AND FORTH! TERRIFYING!
(X) Done something you told yourself you wouldn't
(X) Made prank phone calls SENT A PIZZA TO SOMEONES HOUSE AT LIKE 11PM, SOOO MEAN.
(O) Been down Bourbon Street in New Orleans
(X) Laughed until some kind of beverage came out of your nose LAST WEEK.
(X) Caught a snowflake on your tongue
(X) Danced in the rain
(X) Written a letter to Santa Claus
(O) Been kissed under the mistletoe I CAN'T BELIEVE I HAVEN'T
(X) Watched the sunrise with someone
(X) Blown bubbles
(X) Gone ice-skating
(X) Gone to the movies in 2009
(O) Been deep sea fishing
(X) Driven across the United States
(O) Been in a hot air balloon
(O) Been sky diving
(X) Gone snowmobiling
(O) Lived in more than one country
(X) Lay down outside at night and admired the stars while listening to the cricketS
(X) Seen a falling star and made a wish
(X) Seen the Old Faithful Geyser
(X) Seen the Statue of Liberty
(O) Gone to the top of Seattle Space Needle
(X) Been on a cruise
(X) Traveled by train
(X) Traveled by motorcycle OKAY JUST WENT ON A MOTORCYCLE RIDE BUT IT WAS A HARLEY, THAT MEANS SOMETHING DOESN'T IT?
(O) Been horse back riding I CAN'T BELIEVE I'VE RIDDEN AN ELEPHANT BUT NOT A HORSE
(X) Been to Disneyland, Disney World I THINK BOTH...
(X) Been pulled over by a police officer
(X) Gotten a ticket
(X) Truly believe in the power of prayer
(O) Been in a rain forest
(X) Seen whales in the ocean
(X) Been to Niagara Falls
(X) Ridden on an elephant
(O) Swam with dolphins
(O) Been to the Olympics
(O) Sat on a jury
(X) Learned to juggle
(O) Walked on the Great Wall of China
(O) Saw a glacier
(O) Been spinnaker flying
(X) Been water-skiing
(X) Been snow-skiing
(X) Been to Westminster Abbey
(X) Been to the Louvre
(O) Swam in the Mediterranean DEFINITELY ON THE TO-DO LIST
(X) Been to a Major League Baseball game
(O) Been to a National Football League game
(O) Been to a Professional Soccer game
Posted by Snedakers at 2:01 PM No comments:

My little ten month old is walking! He took his first steps about 3 weeks ago and I've been meaning to post with a video of him but I can't seem to figure out how to do that from our video camera, so I had to use our old camera that does video, and the picture is horrible on it, but I guess you get the point. He was also in a bad mood - he was mad I was trying to make him walk. This video is from this morning. He is starting to stand up on his own and he's getting a lot more confident. It's crazy how quickly they go from baby to toddler! I also weaned him about 3 weeks ago too. I thought maybe he wouldn't go for it because he's never really taken a bottle, but he must've been ready cause he never looked back. 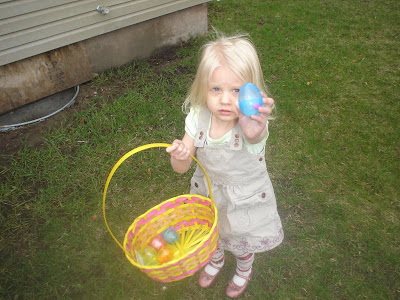 Claire got another surprise visit from the Easter bunny last week. Someone left a bunch of eggs and stuffed animals on our doorstep, knocked, and ran. Claire was still taking a nap, so I had to wake her up - hence the scary hair, but she was SO excited when I told her the Easter bunny had come again, Thanks Easter bunny - whoever you are!

Oh and one more thing, we were tilling up our garden and found.... 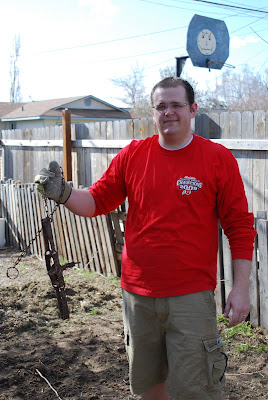 some kind of animal trap, yes you read correctly. For any of you who know what a crazy back yard we have will understand I'm sure. We have found so much CRAP in our yard in the past three years it's not even funny! Dead animals, jars, keys, clothing, money, toys, fencing, a hoe... just to name a few. And this is all stuff that was in the ground! I really wouldn't be surprised if someday we found human bones. I think there's a reason people put grass in their yard.
We're having a ward Western round-up and we're supposed to bring decorations. We're bringing our trap.
Posted by Snedakers at 6:01 AM 4 comments:

Okay, so I'm posting this a little early because I wanted to let you know that because of Earth day, stores like Target, Home Depot and others are having sales on all of their eco-friendly stuff. Check out your Sunday paper ads. Home depot is even handing out free eco-friendly lightbulbs and offering free classes on how to be green. Hope this gets you excited to do a little!
Posted by Snedakers at 5:57 AM No comments:
Labels: green living 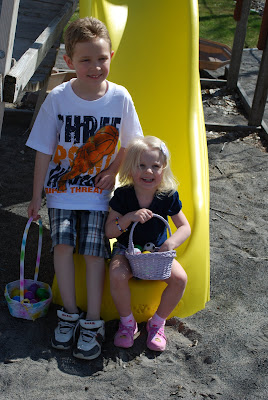 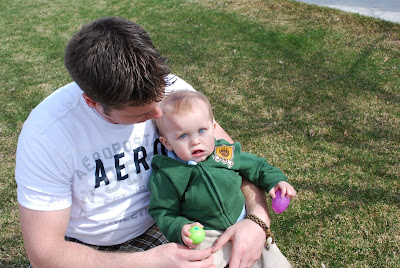 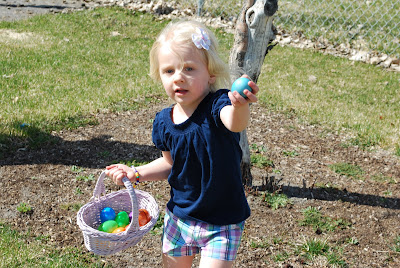 We dyed easter eggs on Saturday, Claire liked coloring the eggs, I wish I had made more for her to do! 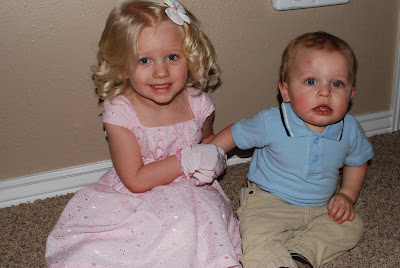 I think she was pretty excited about the easter bunny - she got a new Barbie which I think always goes over well. Jake was more interested in the grass in the basket than the toys I think. 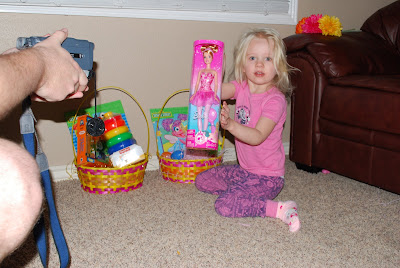 Claire was so excited to wear her Easter dress, I bought it a few weeks ago and she kept sneaking it out of the closet and putting it on. She was also really excited about her gloves as well. She wore them most of the time at church. 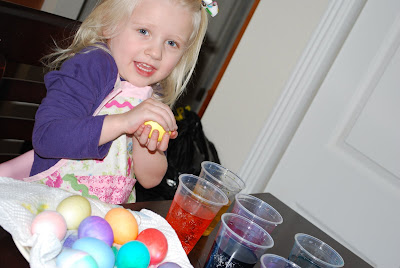 We had a great Easter this year, the weather cooperated and we were able to have a fun little egg hunt for Claire and Parker, Jake even found a few too with Malone's help - they are good buddies. And we even saw an Easter bunny out in the back yard. It was a good day with lots of memories made.
Posted by Snedakers at 9:01 AM 3 comments: 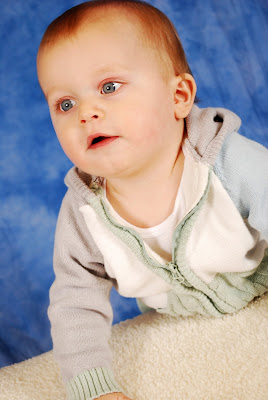 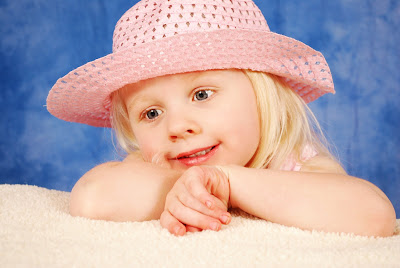 I took the kids to the studio and got some Easter pictures.
Posted by Snedakers at 12:59 PM 2 comments:

Me: Claire who is the prophet? Do you know who he is?

Me: President Monson is the prophet.