The kids went in for well-check-ups today. They are both just about 60% for height and weight. They look good! Claire had one shot today and she didn't cry, she did very well. I bribed her with a prize - and it seemed to work. That's about all. I'm off to watch "Horton hears a poo" as Claire calls it.
Posted by Snedakers at 1:38 PM 1 comment:

This month at Walgreen's there's a mail in rebate for $10 worth of the Organic Physician's Formula makeup. I tried the bronzer/blush, it's pretty good. There are no parabens, and it is the first line of certified organic makeup in the U.S. They have quite a few different things to choose from that you can get for just about free.
Posted by Snedakers at 9:45 AM No comments:
Labels: green living

Well I've just been thinking a lot about Fargo seeing as how they've had the worst flood in over 100 years. Most of you know I grew up in Fargo. I just wanted to let all our friends there know that I'm praying for you, and maybe I can get a few of you reading to pray along with me. Many people had everything destroyed in the flood of 97 and luckily our family escaped without much damage, and amongst the turmoil we saw a lot of people come together for a greater good.

On a lighter note... I got something in the mail today...my BLURB book! As one of my "young" woman recognition requirements I worked on my blog and turned it into a book. If you haven't heard about Blurb and you are a blogger - you must! It slurps all of your blog posts into a book with all of your images and everything! It's great, and my book turned out really nice. It's really making me see what I should be putting in my blog. Anywho - just excited and wanted to share.

Also, I started renting a Studio, I share it with a bunch of other people, so it really isn't that big of an investment, but I'm so excited because I'll be able to take my photography to the next level. I'm sooo excited. So if you live in Idaho Falls, I'd love to take some pics for you!

Oh and Jake is in this really funny stage where he'll copy things we do. It's crazy. He waves, has said hi, mama, dada, cracker, ball, bye bye. I don't like this whole - getting older business, where has by baby gone?

Well I had a few words from Claire I wanted to write down, so I wouldn't forget. She has been saying some weird things lately and some funny prayers. I also wanted to post a few things that Claire is really into right now so I don't forget.

Last night at prayer she said "please bless the Lamanites that they won't fight, and please bless that nana will come and we can take a walk in the forest"

I had Jake in his snowsuit, this giant thing that he can't move in and he looks very fluffly like a teddy bear, and Claire asked if she could "hold Jakey the bear", when he's not wearing his suit, it's "Jakey the boy".

Right now she just loves girl things, she loves skirts and dresses - nothing new for her. She got a water doodle book from her Granny, basically you paint it with a water pen and the color shows up, she calls it her journal, that's probably her most favorite activity right now. We've been going to story time at the Library since she turned three and she loves to look at the fish they have there and she loves to do the read along books on the computers. Her favorite shows are on "pbskids.org" she calls it, they are: curious george, super why, sid the science kid. She tolerates Sesame street - which makes me a little sad. And she still really loves Dora the Explorer and Diego. She loves singing songs that she makes up, they're pretty silly. She still loves her disney princesses and tells me the story of each one while we're in the car, and sings the songs to each movie along with it.
She's finally saying her "r's" and "l's" correctly, well at least when she's focusing on it. I thought that day would never come. She loves bath time with her brother and asks for a bath everyday. Right now whenever she says something it always ends with "or something" while she shrugs her shoulders. She seems so old when she does that.

We are so excited for summer time, it's supposed to be like 70 degrees here today. I love warm weather. I got my tomatoes planted, Chris is even itching to do some yard work - strange.
We've got well visits for them next week so I'll be posting again about height, weight and all that fun stuff. I guess that's about all for now, I'm just so glad I've got two healthy children, who are only a little strange...
Posted by Snedakers at 8:01 AM 4 comments:

So if you haven't already, it's a great time to start planting your veggies for this summer's garden. This is the best and cheapest way to eat organic! I can't explain it, but I get a lot of pride and fulfillment out of my garden - not to mention the fact that it saves me lots of money. So much fun too, my daughter loves to help me weed and pick the plants, and she even helped plant her own tomato plant this year!
Posted by Snedakers at 10:10 AM No comments:

I'll probably post this on my slicksaver blog too, but it looks like a great site to help you live healthier, and if you sign up for their newsletter they'll send you a coupon book for lots of healthy food products, even some organic product coupons, I'm told. Check it out here.
Posted by Snedakers at 10:05 AM No comments:

I just thought I'd write a little bit about our Jake who is learning and growing SO fast. He just turned 9 months and has been wearing 18 month clothing for a while now. He's pretty big, and I'm sure it has NOTHING to do with his enormous appetite. Before bed last night he was acting hungry so I thought I'd give him a snack, he managed to eat almost an entire banana by himself, along with a gogurt and the rest of Claire's gogurt. I swear Jake eats more than Claire! He's also doing somethings that I guess I forgot happen so early, he will stand at the gate and whine for me "mama, mama", he also knows how to wave and today I caught him trying to put the charger plug in the back of the laptop which he's seen me do. He's getting around and learning he needs to move quickly in order to get into trouble, he gets his tongue sticking out in determination. He's also cut his top tooth! I can't believe how big he's getting!

Oh and I had to mention something cute Claire said yesterday, we were out shopping and she saw this cute Dora the Explorer night gown. "Oh mom, that's dorable!" and it was -- very dorable.
Posted by Snedakers at 4:55 PM 3 comments:

So this past week I packed up the kids and we headed to Virginia to visit my family there. I had found an awesome deal on a flight that I just couldn't pass up. Luckily my Granny decided to come with to help with the kids. We had a pretty fun, relaxing trip. Both the kids did remarkably well on both flights (minus a few potty incidents and a few spilled drinks). On our way home we hit a bit of turbulance which just made Claire giggle and giggle and when we finally landed she shouted out "Yeah, you did it airplane, you did it!" She had a few rows behind us chuckling at that. 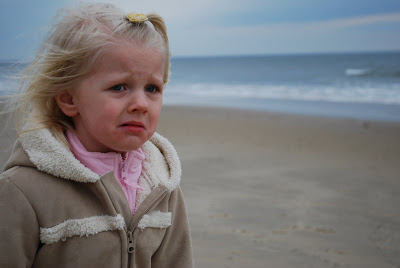 Unfortunately we happened to be there during the worst snow storm of the season for them, which shut everything down for a few days, so we weren't able to go into D.C. like I had hoped, but we were able to make it to Colonial Williamsburg, and Virginia Beach. And of course I was able to make the rounds to all of my favorite places to eat out there that I miss terribly, including some good ole home cooking!
We had lots of fun and of course it went by way too quickly. 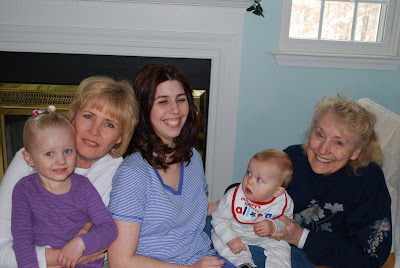 Claire had fun getting some piano lessons from Nana and can now play "hot cross buns" on the piano, 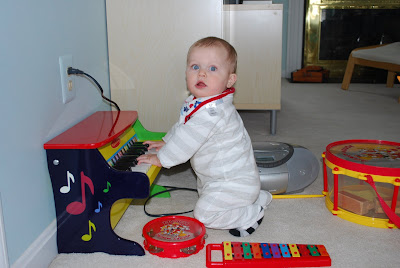 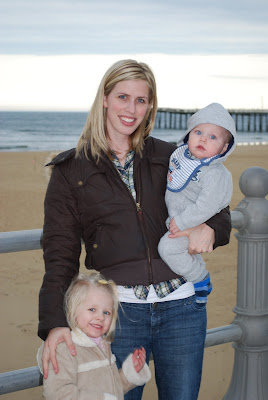 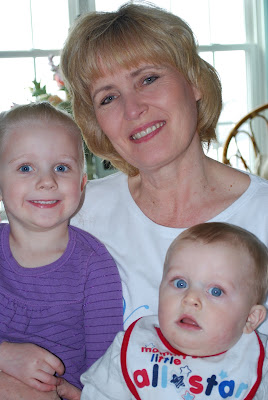 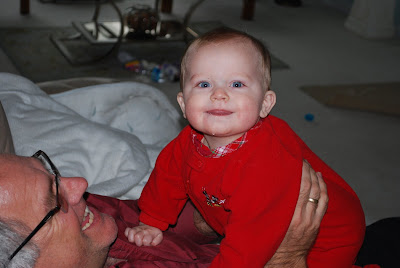 Jake had fun with all of my mom's music instruments too, he also made good friends with Nana and Papa Ray. Unfortunately Claire didn't warm up to Papa Ray - sorry Dad!
Thanks for having us - it's your turn now!
Posted by Snedakers at 9:27 AM 5 comments:
Newer Posts Older Posts Home
Subscribe to: Posts (Atom)